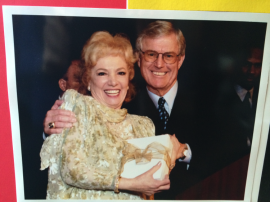 Sometimes everything comes together in the most unexpected ways.

That was the case for the St. Louis Rams in 1999. Our highly touted starting quarterback, Trent Green, tore his ACL early in the season. We were devastated.

That day, Rams president John Shaw called my mom, who helmed the team. The two had planned to meet for dinner that evening.

Mom replied, “Don’t be silly, Johnny! I’ve done Kurt’s chart and everything is going to be fine—we might even win the Super Bowl!”

Backup QB Kurt Warner, born on the Gemini-Cancer cusp, was one of several players who stepped up that season to become a hero in the NFL version of a Cinderella story.

As I mentioned before, it’s been 15 years since the Rams won Super Bowl XXXIV in what was dubbed “The Greatest Show on Turf.” The team had a great big celebration here in St. Louis on Sunday at Union Station.

Not unlike Cinderella’s story, publishing this book, Horoscope: The Astrology Murders, was a dream come true for our family—as it would have also been for my mother. Mom was always a big dreamer with big plans, and even after her death, she still manages to surprise people! Like Coach Dick Vermeil, who didn’t know Mom wrote a book.  At the celebration on Sunday, I told him she’d been writing notes about this character for years, using whatever scraps of paper she could find to turn her ideas into reality.  After my explanation, he put his hand on my shoulder and said he missed her. Vermeil, one of the best to ever coach the game, also gave a touching word of thanks to our family at the public celebration. 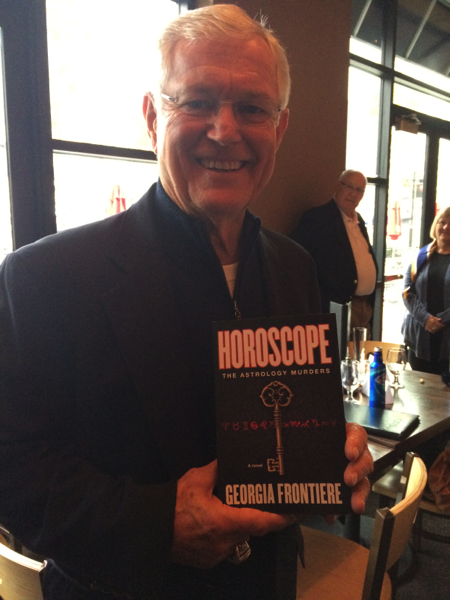 That wasn’t the only nod to one of the greatest seasons ever.

It was St. Louis-style throwback time at Monday Night Football: the end-zones were painted blue with simple, vintage “St. Louis” lettering, current players wore throwback uniforms and fans all across the stadium wore jerseys featuring the names of players from the 1999 team. Most of the players from that championship team—including Marshall Faulk, Isaac Bruce, Kurt Warner, Torry Holt and D’Marco Farr—came out onto the field at halftime, along with Coach Vermeil, who said a few words about the family we created that season. 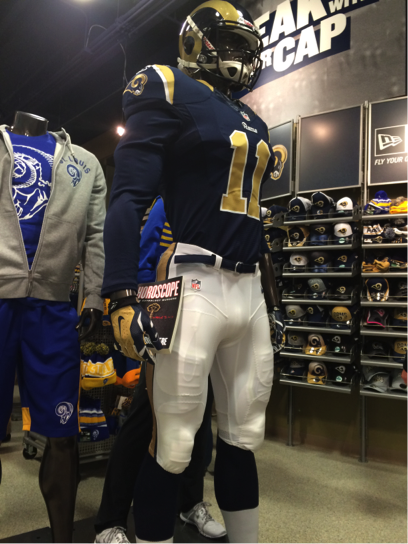 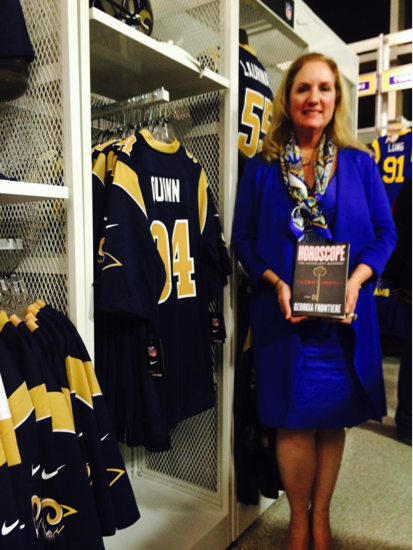 And before the game began, I had the opportunity to spend time with several board members from local nonprofit Safe Connections, which works to prevent and end domestic and sexual violence while helping survivors reclaim their lives. As you might remember, part of the proceeds of Mom’s book will benefit this wonderful organization. From the sidelines, we watched the MNF broadcasters get ready, and the players warm up and, of course, we saw the throngs of excited fans that surrounded us on the field.

I also had a chance to see Mom’s book on sale in the team store. How many stadiums sell books? The Rams organization was a pleasure to work with 15 years ago, and still is now.

Thank you, St. Louis, for another warm, friendly welcome.  I’ve had a wonderful time talking up Mom’s book. Stay tuned for the next installment of the soon-to-be Horoscope series! 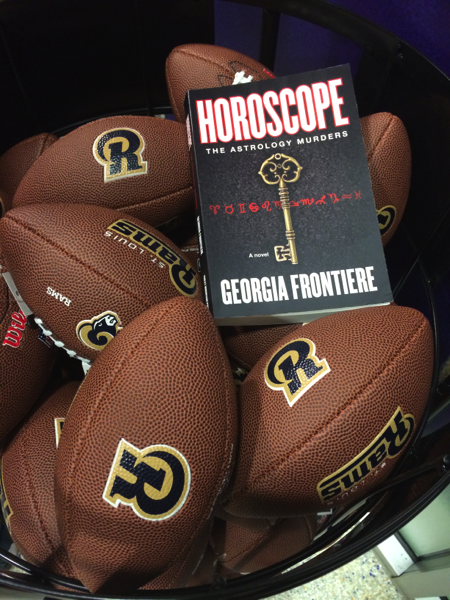 It’s Been FunOn Tour with Book in Hand, Memories in Mind